attention when using drone on a world trip 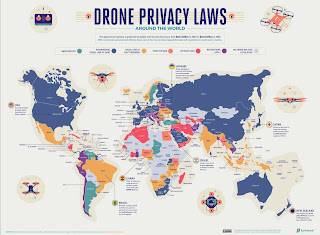 Traveling with drones is not always unproblematic. Wonderful videos by world travelers are inspiring more and more travelers to take drones with them on their own. What was often a gray area years ago is now often quite well regulated and sanctioned accordingly if necessary.
It is wisely to stay under a drone weigh of 0.55ln or 250g, to get more relaxed rules from the EU till US laws. This rule just DJI drones can fullfill with a good video / picture quality currently.
These 250g law will give them a nice selling push!
In the last few years there have been quite a few incidents where travelers have ended up in prison, and sometimes just possession or import was enough.

In 2013 there was a well-documented case of a Trans-Africa on the east route, where two travelers were in jail for a few days, when a DJI drone was discovered in the trunk upon entry. At that time it was still possible to travel from Libya (thanks to Gadaffi) and the land route to Egypt was open: Link 1 and Link 2. Other Overlanders got caught it in Iran in 2019 with the subject of drones: According to my research, it was a longer stay in prison: Link (later release). Or there were (much smaller) problems with the entry in Morocco (link),

Although the use of drones is banned in some countries, a YouTube research quickly gives an insight into how strictly they are handled. Which of course does not protect against problems when the going gets tough. A comparison with the search term "Drone Video" peppered with the country names is a good indicator of the level of risk. Drone videos in Iran are very thin to give an example.

I suspect that in many countries there still has to be a lot going on. The drone itself has to be found and recognized, a customs officer who does not know his way around - and the rest of the process can be quite dynamic. Neither can the language, pretend to be stupid or uncooperative, or come across an officer who is having a really bad day.

With drones like the DJI Mavic Air, which is so stowable, I flew to Equador, for example, and completed several domestic flights including a visit to the Galapagos without the drone in my backpack being noticed during the scans. Equador can charge a substantial fee here if it is discovered. The DJI Mavic Mini II is much smaller again.

These new regulatoris did change a lot, so you shound trust any completed Map on the Internet lile showed above.  At 2021 you need a drone licence inside of the EU as example. The licence is easy to optain, but you had to know about in front of your trip. Many countrys too did restrict any flight in Nationalparks at example, something else such worldmaps cant show you.
At least did show the map above, where you should be really careful, where you should prepare yourself deeper - at least for the red areas. To use websites like uavcoach or drohnen-camp is not enough, because you didnt know when they got their last update.

Conclusion
Inquire before your vacation or your trip. It is well worth this time to learn about local regulations, buses, and fees. That helps to fight only those fights that can be won.

Fighting with the customs officer in Equador because a fee of $ 800 for bringing a drone with you is is unnecessary. Flying there knowing what it can cost if the drone is discovered, shifts the decision to transport the drone to a much more relaxed "setting" - home in front of the computer...

Inquire before your vacation or your trip. It is well worth this time to learn about local regulations, buses, and fees. That helps to fight only those fights that can be won.

And now one of these reasons, why we overlanders do carry a drone. Not to disturb animals or peoples. Just to catch the stunning landscape.
drone gear