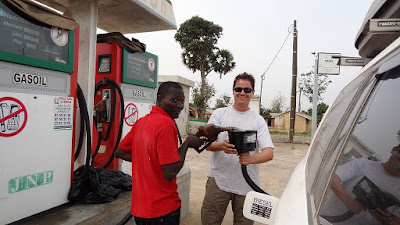 You find many travelblogs who did report serious breakdowns because of bad fuel containing water, rust or dirt. It does not just happens in the third world, you can find these Reports too out of more remote areas, from Australia, US, eastern Europe.
If you watch in detail, these repports was never one of those big a gas station brands who delivers the same quality in the whole country.
On an extended trip you should start to refil fuel in locations where you expect good fuel. In Cities you can optain good fuel anywhere. Even in Brazzaville, Zarrate or Magadan. That can be different in small towns and in remote areas.
Refilling fuel in towns and using brands like shell, bp or similar will avoid this issue. Also you can extend your range with canisters or an auxiliary tank.
If you know that you have to optain fuel in remote ares I strongly suggest to use an external fuel filter like MrFunnel. 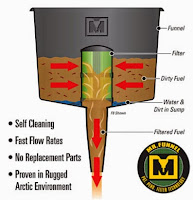 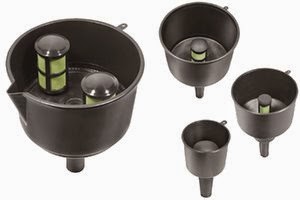 You can buy the fuel filter in different sizes. The difference between the sizes is the flowspeed and not the filter quality itself. Because of my both tank size of 100l and 180l I did use the AF15 Filter size. Usable for diesel and gasoline.
You can buy them here: MrFunnel external Fuel Filter
During my journeys (70'000 Miles so far) through africa, south america and europe I did use it always when the gas station was very remote and the fuelstation itself  a "noname" brand.
With the AF15 the possible fuel speed was pretty ok, but you still need strong arms to optain 100l or 26 Gallons. But it is still better to get some arms ache as to run into an breakdown, specially in remote areas!
At the picture on the top you can see me on a gas station on my transafrica trip at 2012.
I strongly reccomend to use an customized zip bag for storage. Because it didnt help to filter the fuel when the fuel filter is dirty itself. And independent if gasoline or diesel you dont like the smell.
I found these bags here: MrFunnel Filter Bag

I suggest to transport the fuel filter outside of the cabin. I did carry it mounted to my rear spare tyre in africa, later too in my roof box.
Decide yourself if you want to start filter the fuel too at a non trusty gas station. I strongly suggest to do, if you are travelling extended abroad and for travelling in remote areas. A breakdown outside of civilisation can fast lead to unwanted szenarios.
But also with carrying a filter - it is much easier to optain fuel where you can expect quality.
Articles you might also be interested in:
Mods I wouldn`t do again for overlanding or vanlife
Choosing the right vehicle for an extended trip
Diesel vs Gasoline for an worldtrip?